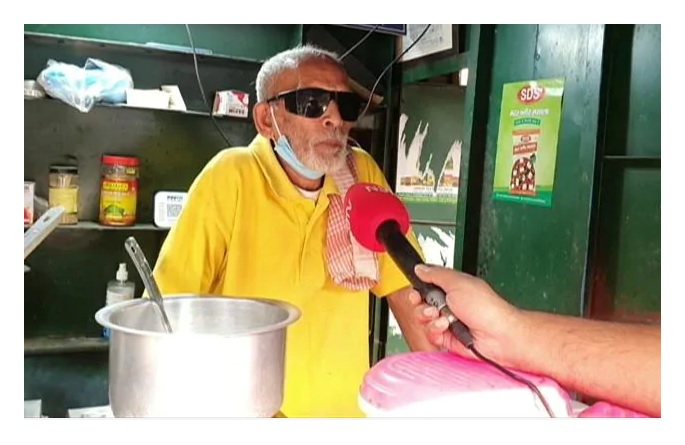 Baba from Baba ka Dhabha was amazing on social media.  YouTuber Gaurav Vasan made a video of his bad days which became very viral and people from Delhi came running to help him. This is how the story of Baba’s Dhaba was started. Living a very miserable life, Kanta Prasad the owner of Baba ka Dhaba was struggling to earn their livelihood. Both husband and wife at very old age are working hard to earn amount to get their daily food. But as we all know that we don’t know how destiny can turn around us. Age doesn’t matter in the case of destiny. The same happens in the life of our Kanta Prasad and his wife.

Due to lockdown 2020, Kanta prasad Dhabha is on the way to shutdown. But suddenly he met with a food blogger, YouTuber Gaurav Vasan. This meeting was impacted heavily on social media as Gaurav share the video, it hits millions of views. After listening to the painful story of Baba ka Dhaba, people started visiting Dhaba and offering money to him. Baba i.e. Kanta Prasad also got a lot of money from charity. Also, his Matter Paneer got famous in a day and Gaurav raised a huge fund in the name of Baba i,e, Kanta Prasad.

The Rise and Fall of Baba ka Dhabha

Everything is going well for Kanta Prasad aka Baba. He was getting name, fame, and media coverage as well. But all the story is not having a happy ending. Sometimes, we are the only culprit of the story. The stage for a good life was set for Baba, but later he had a dispute with Gaurav Vasan regarding the same money, the matter reached the police station.  Well, in the midst of all this, Baba closed his Dhaba and opened a new restaurant with great fanfare in December last year with the help of donated money.

In the Dhaba, where Kanta Prasad and his wife used to cook themselves, in the restaurant he started sitting facility too.  Hired two cooks and a waiter. Initially, even after running the restaurant, it seemed that Baba had gone back to his days. But after the initial enthusiasm, the customers gradually decrease. Expenses kept increasing and income kept decreasing.

Kanta Prasad himself told that he had invested ₹5 lakh in the restaurant, hired three people. His one-month expenses were around ₹ 1 lakh.  But earning up to 40,000 in a month.  The result of the huge loss was that Kanta Prasad had to close his restaurant.  Baba says that he was given the wrong advice to open a restaurant and he had to bear a lot of loss.

All his money is gone. Now Kanta Prasad has again returned to the same food stall i.e. Baba Ka Dhaba, from where he became famous.  But due to Corona and lockdown, the income is very less here too.

Conclusion From the Storyline

We can have multiple extractions from the story that last only for a year. The first being the fact that life doesn’t have an unlimited opportunity. So you must grab that opportunity instead of wasting your precious time criticizing others. Also, you don’t even know when can good luck knock on your door. Age is just a number sometimes. If you are working hard, bad luck has to surrender and gives you an opportunity to do something big in life. And finally the last but not least, success is very hard to handle. Success can only be handled by calmness and politeness. If you are the same as before success, you can go higher and higher. But if you become arrogant, then success is just a blink of your eyes.