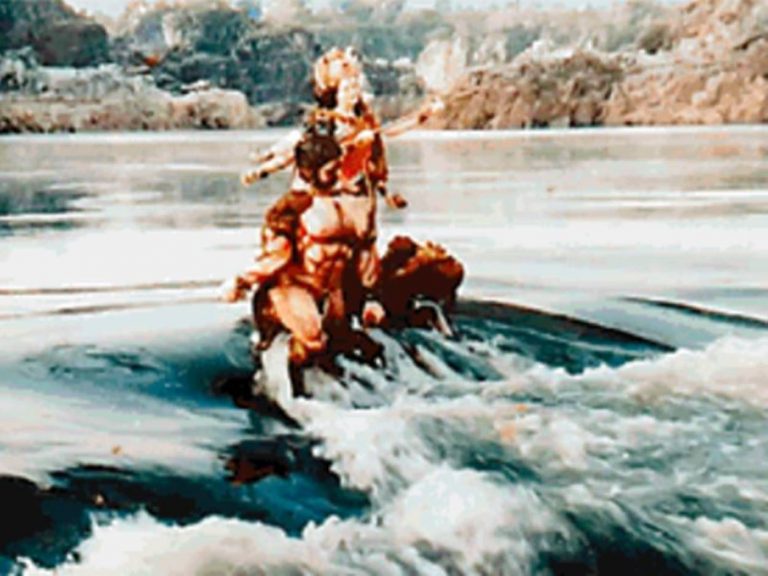 Science is progressing day by day and is solving many questions of the universe. Still, there are many questions on which science fails to answer. People regarded them as miracles or the power of God. One such incident was seen 38 years ago in Jabalpur. Those people who saw this amazing scene have not forgotten it even today.  After immersing the huge Goddess Durga idol after Durga Pooja in the fast current of the Narmada river, the idol reaches the middle of the stream and stood up at once. The miraculous part is that the flow of the river was so severe that even the elephant could not set foot, but the statue stood for four days.

Durga Pooja & Visarjan of the Statue

This happens on October 28, 1982, when immersion of Durga idols was going on at Narmada Beach Bhedaghat in Jabalpur. Chamatkari Durgotsav Samiti, Patan also reached the place to immersed ( Visarjan of Maa Durga) Durga statue. But the scene that people saw after that was a miracle itself. After immersion, the idol of Maa Durga came down after minutes.  But suddenly it stood up in the free-flowing stream. The statue of Goddess Durga stood and stay still like a platform had set up in the stream. But the best part is that it stood and still naturally without any artificial source. Also, the flow of the stream is so heavy that an elephant cant even withstands but the statue stood.

It was also difficult for a boat or diver to reach that place.  By evening, this news spread like a fire in Jabalpur and surrounding areas.  On the second day, the Durga Mela of thousands of people started.  The statue remained the same for four days.  Till then millions of people had watched this scene. As the other idols were disappearing into the water body after immersion, but this statue first came up and then reached the middle of the stream and stood there.  Not only this, she stood like this for four days.

The famous Durga idol was built by the famous sculptor Kundan of the city. People kept making many arguments regarding the installation of the Durga statue in the water stream.  It was said that the slab under the statue must have been stuck in the stones. However, no one is able to find out the exact reason behind it.